Been there; done that. Very good! Ever wondered what the family that is struggling for a living is dreaming of? Just food on the table. Yup! Just 3 square meals a day! This is precisely what Bike Aid has been doing through its Ride for Ration (RfR) events since 2011. The RfR is a journey; not a destination. A journey that meanders through the heartlands of Marsiling, Chai Chee and Hougang with pit stops at homes in need. Coupled with that occasional peek into the health of the children and their performance.

Which brings us to Ride for Rations 2017. With the same objective of providing monthly rations to families living in one to two rental rooms. Through a ride covering 240 km from Malacca to Singapore.

Ride for Rations 2017 is yet special in more ways than one. For it also marks the Silver Jubilee of Bike Aid (Singapore), the entity that organizes Ride for Rations and has been raising funds through cycling for many other charities before zooming in on Ride for Rations. 25 years of cycling and fund raising! Wouldn’t it be nice to partake in this silver jubilee effort?

The cause for the ride:

To raise funds to:

The aim: to raise

100% funds raised will be used for the above purposes by Sunlove Abode for Intellectually Infirmed Ltd.

As we contemplate on RfR 2017, let’s keep in mind that the ride is to benefit households living in 1-2 rental rooms; have no sources of income; elderly with no children; whose children are not supporting them; single parents; suffer from medical and intellectual infirmities; and require financial help to cover rental, conservancy, electricity and basic food expenses.

The rations purchased with the funds raised will be distributed monthly at Chai Chee, Hougang and Marsiling.

Each participant must pay a registration fee of $280 (shared room) or $350 (single room) for expenses related to the ride, excluding charges incurred due to the registration and payment portal. The organising committee consists entirely of volunteers and receive no renumeration. 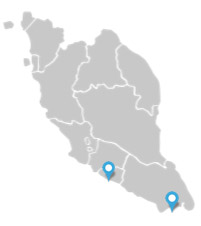 Cycling route: trunk roads that are scenic, affording non-interrupted distances ranging from 2-10kms and having mix of flat roads and slopes.

Ride for Rations is not a race; while providing an opportunity to cyclists wishing to test their prowess, the event is also aimed at amateur and recreational cyclists with our sweepers traveling at about 18km/h.

Participation is subject to acceptance of Rules and Regulations for Ride for Rations, raising of funds specified above and acceptance to indemnify the organisers. First time RfR participants are also required to attend a briefing on RfR, participate in a total 2 rations distribution at 2 of the estates by April 2017 and also in a physical readiness ride.

Bike-Aid (Singapore) reserves the right to reject applicants for Ride for Rations 2017. 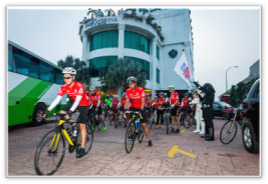